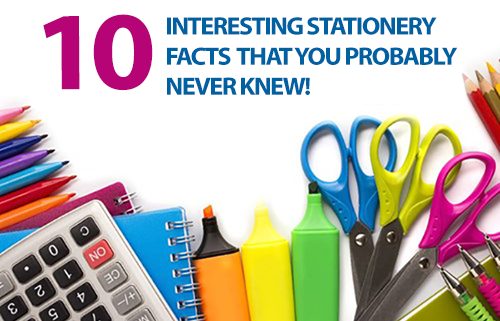 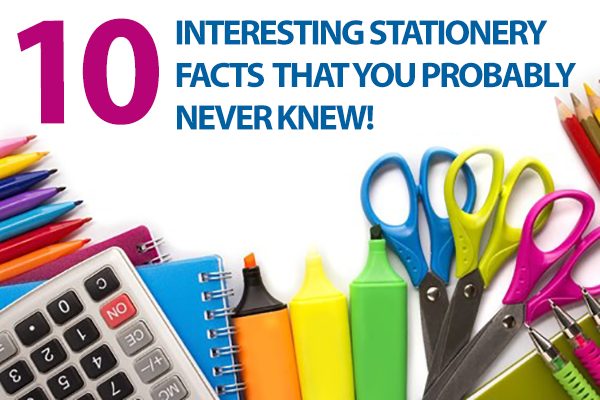 Office essentials can be more interesting than they seem, trust us! A huge number of the UK’s workforce are using stationery day in and day out, but how much do they really know about the world of office supplies? In honour of #NationalStationeryWeek, we’ve explored some awesome facts about stationery that you probably never knew!

Spencer Silver was working away back in 1968 trying to create a strong adhesive but could only come up with a very weak adhesive that could be removed without leaving behind any marks and the world of post-it notes was born!

The average lead pencil can draw a continuous line for approx. 35 miles. However, if you would like to test this, we would suggest bringing along a handful of sharpeners too and film it as we’d love to see it!

As yellow is in the middle spectrum of visible light, yellow ink highlighters work really well for people with colour blindness and this is one of the biggest reasons for the high quantities of yellow highlighters ordered.

Back in 2010, the ‘Fulgor Nocturnus’ pen sold for 8 million dollars at a Shanghai auction and was decorated with 945 black diamonds and 123 rubies. What we want to know is, did the owner actually use it or simply just admire it!

In summary, to help you visualise this fact, it would cover the Manchester’s United football ground at Old Trafford, 17 times.

How many times have you been told off by a teacher or employee for chewing on a pen-lid? Here’s why! To help people breathe, many pen manufacturers now put holes in the pen lids to help prevent choking.

This works, honest we’re not pulling your leg! Why not try it out for yourself next time you leave a loaf in the cupboard for too long?

Yes, it’s true a pencil will also work in water although, we’re not sure how well the paper will fare. What’s more, pencils can also write in zero gravity!

The stapler was initially named after the company, E.H. Hotchkiss of Norwalk who invented it.

So now we’ve enlightened you to a few fun facts about the world of stationery you can tell all your friends what you’ve learned!  One other key fact is that some Office Supplies providers like Quills can simplify the ordering process as your one-stop shop for all your office services. Take a look at all our services.

Time and time again studies have shown that happy employees are more productive and there’s nothing that will get your employees happier than some Easter Treats and maybe even a festively themed office! In our latest blog, we explore some quick and easy ways to get the office prepped in time for the long weekend.

Arrange an Easter egg hunt (with a twist!)

Admit it, you’re never too old to enjoy an Easter egg hunt! Arranging an internal Easter egg hunt in the office is really easy and it’s also a great opportunity to get the entire team working together. Personalise your hunt to suit your office and even consider more appealing prizes such as vouchers or personalised gift sets to really get your employees in the festive spirit.

Quills can supply a range of promotional gifts that would make great prizes for any Easter activities including chocolate, hampers, mugs, stress toys, keychains, pens, bags and much more. Take a look at our promotional site here to get some inspiration and view our full range!

Easter is the time in which all the spring plants start to bloom and the office is guaranteed to look lovely and festive covered in tulips, daffodils and bluebells or why not consider a living wall! Alternatively, if you would like a display just as beautiful but doesn’t require the same level of maintenance, explore our extensive range of living logos! Our living logos are signs made of real plants that are no longer growing so require no aftercare or maintenance, they’re fully custom made so there are limitless creative options! Find out more here.

Decorating Easter eggs is so simple yet so effective, not only will it get your employees in the festive spirit, but it will also create a fun and competitive atmosphere! Give each of your employees an Easter egg and free rein to decorate it and then offer prizes for the first, second and third best-designed eggs! Determine rewards based on creativity or even consider branding the eggs with your own logo. Some great egg designs to consider include:

But don’t worry, the cost of purchasing arts and crafts for the office doesn’t have to ruin Easter! Head over to Quills where we supply all the necessary arts, crafts and stationery needed to design your Easter eggs…

No matter how you plan on celebrating Easter in the office, make it personal and get all the team involved. From all the team at Quills, have a great Easter and long weekend!

As we spend an average of 35% of our adult life at work, we all strive to find a company where we can be happy and have a good work-life balance.

So what makes an employee happy?  Take a look at our infographic below for tips on how to achieve job satisfaction and happiness at work.