Blog - Latest News
You are here: Home1 / Business2 / Should You Allow Dogs In The Office? The Pros and Cons

There has been a wave of “pro-pet” research in recent years. Statistics about dogs in the office reducing stress and increasing productivity have been shared via every major news outlet . . . but is this just another fad? Should you allow your employees to bring dogs in the office, or will you just end up with a larger cleaning bill and chewed wires?

Today, we’re going to be exploring the pros and cons of implementing a pet-friendly policy in your workplace to help you decide.

One of the largest benefits of allowing dogs in the office is that studies have shown that they reduce stress.

The most commonly cited study is Virginia Commonwealth University’s 2012, who found that employees who brought their dogs to work experienced lower stress levels throughout the work day, reported higher levels of job satisfaction, and had a more positive perception of their employer.

This was achieved by testing the saliva of the study participants throughout the day to monitor their Cortisol levels. (Cortisol is the hormone that measures stress.) At the beginning of the day, all employees had similar stress levels – but, as the day went on, the differences in how stressed they were became apparent.

Out of the group, the employees who brought their dogs to work had the lowest stress levels. Those who were the most stressed were dog owners who had left their pets at home.

Negative: Some people have dog allergies

However, there is going to be one group for whom having dogs present will distinctly increase their stress levels: people who are allergic to dogs. If you have a pet allergy, you won’t want to be surrounded by them for the majority of your day.

The common side effects of pet allergies are:

You can imagine an employee dealing with these at work is likely to be unhappy – and far less productive. 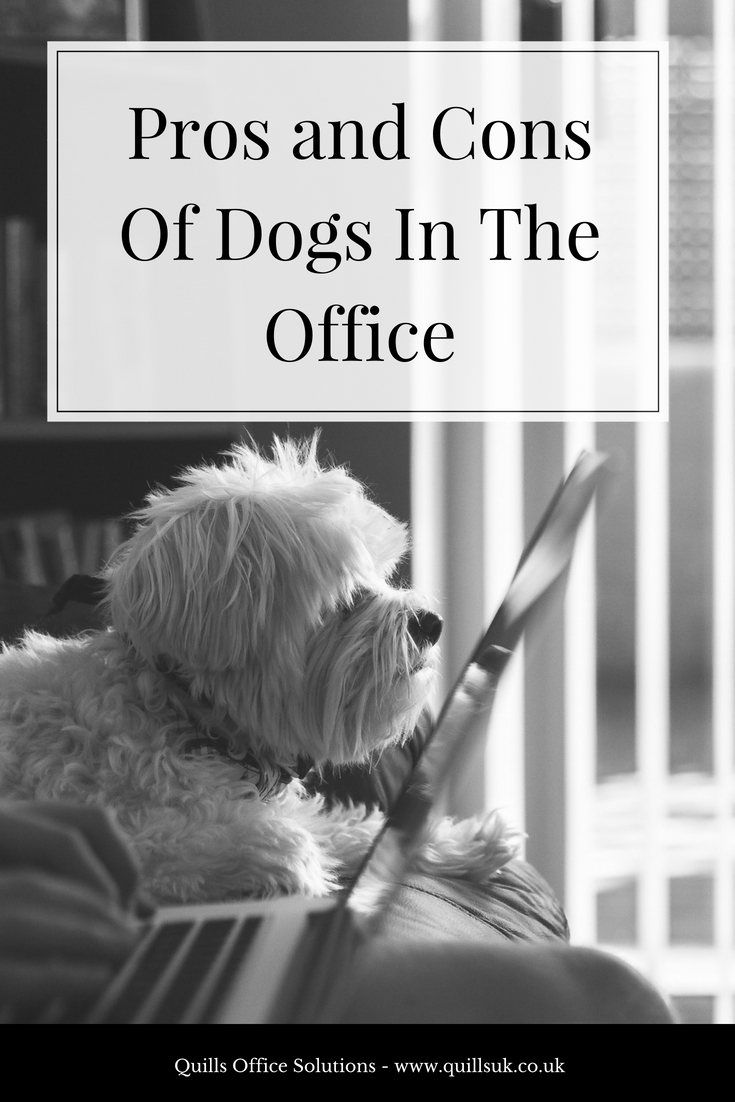 That being said, while a dog allergy could hinder productivity, having dogs in the office is overall said to increase productivity. The same Virginia Commonwealth University study that discovered decreased stress levels also found that having dogs present increased productivity.

“Nearly half of those who brought their dogs in reported increased productivity, while the rest reported no remarkable difference in their daily work output. A majority (80%) of those who did not bring dogs in did not report reduced productivity in the office, and 25% said dogs positively affected productivity.” – Source

While not everyone may be allergic to dogs, a lot of people may just dislike them – or worse, be scared of them. For these employees, coming into a workplace full of animals may not be beneficial. In fact, it could lead to them feeling undervalued by the company and unhappy at work. Hardly a recipe for productivity.

Dogs can be somewhat like babies – when people see them, they stop and make a fuss. In an office situation, this is a great way to get to know people and break the ice. It encourages employees to interact and build relationships with each other.

Building friendships with people at work is actually a large factor in job satisfaction.

Having a friendly and well-connected workplace develops a better company culture and makes your office a better place to work. However, on top of this, collaboration is also where most innovation happens – so increasing collaboration in your office can mean your business flourishes. 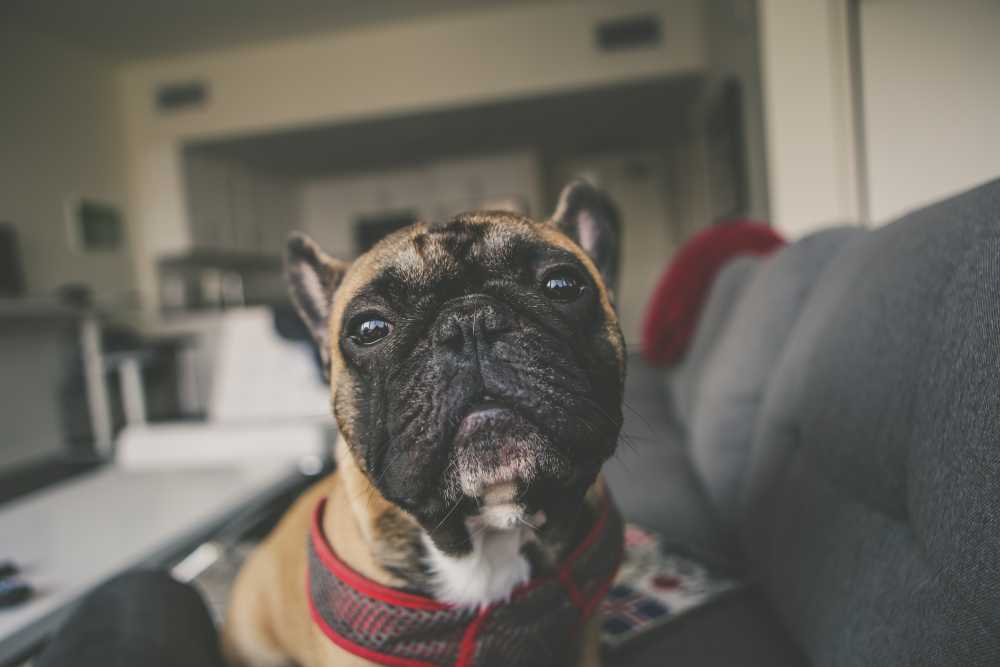 Having a dog may bring a bit too much joy to the office, though. Your employees spending significant amounts of time fussing over a dog may end up as just a lot of lost time.

Positive: Good for your animals as they aren’t left all alone

Dogs in particular are highly affectionate animals that often don’t like being apart from their owners. When working, owners usually have to choose between worrying, popping in  during the day or paying for expensive dog sitting services.

Allowing dogs in the offices stops your employees from needing to expend all that extra effort.

As well as your employees may look after their dogs, they’re still animals – and hygiene isn’t on their list of priorities.

A 2016 survey by Banfield pet hospital found that 82% of employees feel a greater sense of loyalty to pet-friendly companies, 88% think pets at work improve morale and 86% say they reduce stress. – Source

In the UK, 45% of people have a pet – and over half of those people have a dog. (26% of the population owns a dog.) This means that to a significant amount of the workforce allowing dogs in the office is an enticing benefit – and a good reason to stay. 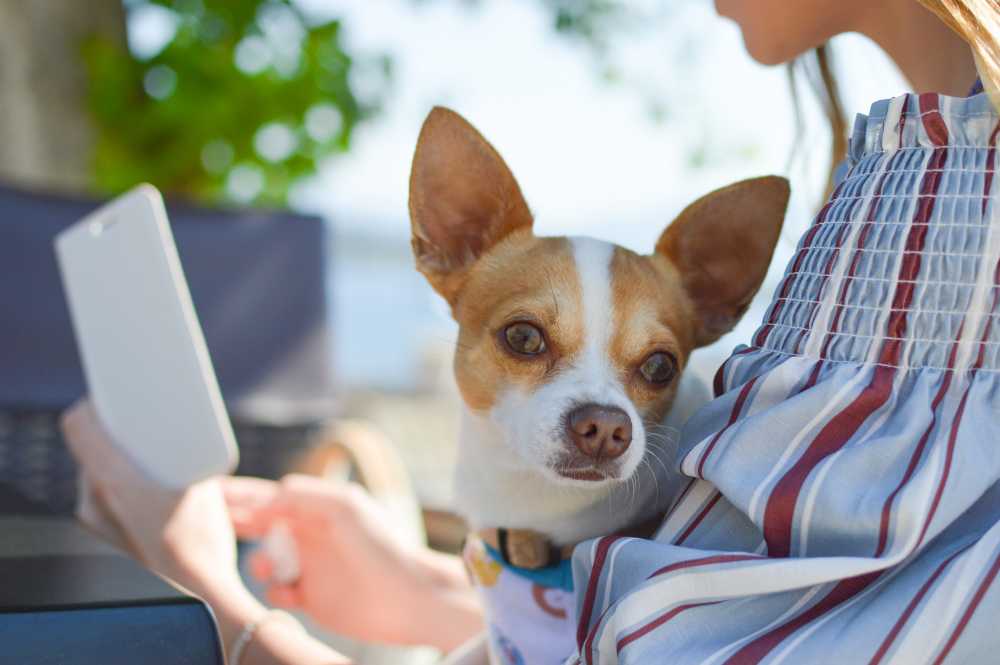 One of the largest potential drawbacks of having dogs in the office is the health and safety threat. Even the best behaved dog can get overwhelmed and spooked, or feel threatened by a stranger . . . and as they’re animals, their go to response may be violent. Naturally, this is not something to take lightly – especially considering the potential legal ramifications.

While allowing dogs in the office has a wealth of benefits, there are also a considerable amount of potential negatives to take on board. Before your business decides to implement a pet policy, here are some of the top concerns it should address: 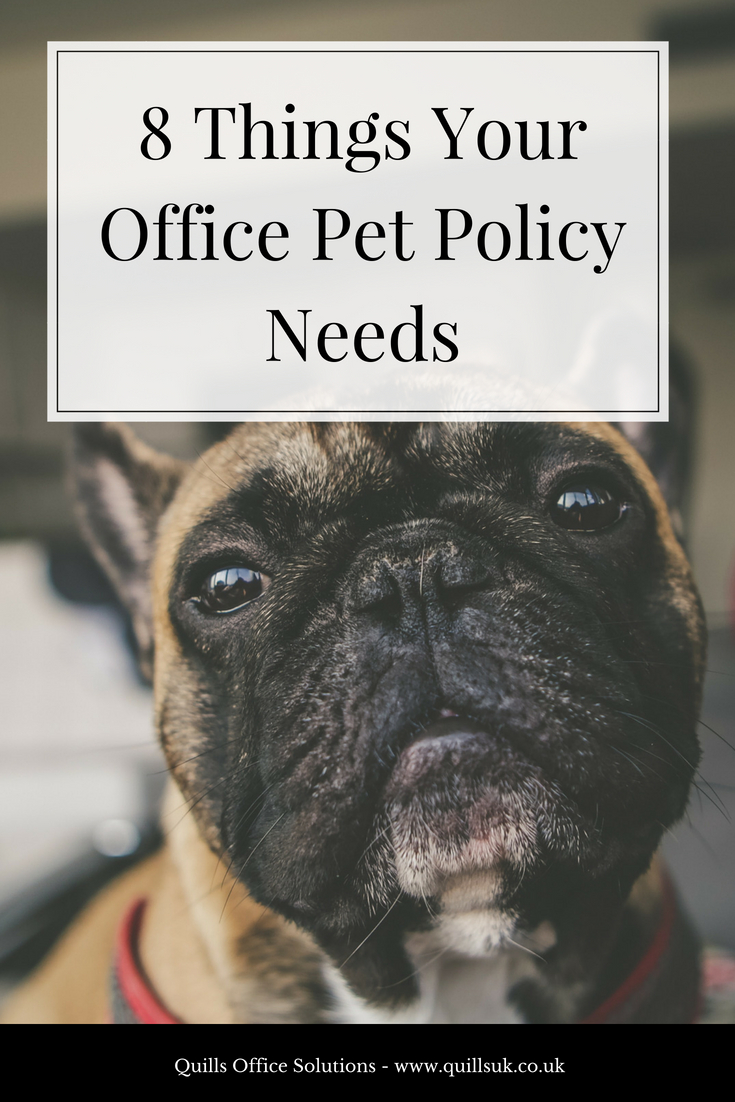 1. That if anyone objects, it’s over

It’s essential that your employees feel valued and respected at work – so a good thing to include in your pet policy is an assurance that if anyone object to having pets in the office, pets will be removed.

If allowing dogs in the office, it’s important that you get information on their behaviour and temperament. Otherwise, you may end up with yappy, aggressive dogs running riot in your working space . . .

While you want your employees to feel as comfortable and happy as possible at work, it is still a place for work. Having an untrained dog around is distracting and dangerous. Plus, it can make your office look like an unprofessional environment to clients.

4. Make sure they’re healthy and up to date on their shots

Asking for proof from vets to ensure that dogs are healthy and up to date on their shots is a good way to prevent any potential health problems.

5. Insurance policies; who is responsible for damages

While it hopefully won’t happen, having animals around significantly increases the chances of office damages. To ensure that if anything does happen your business is protected, make sure that both you and the pet owner have the relevant insurance. Plus, be very clear where liability lies.

A possible addition to your pet policy is the enforcement of pet free areas.

7. Whether pets need to be kept on a leash

Some offices may be happy to let dogs roam around freely, but some may prefer them to kept on a lead the whole time. Specifying how dogs need to be kept when in the office is a good idea.

8. Dogs must get along with other dogs

If your office allows more than one dog in at a time, you need to ensure that the dogs have been socialised and can interact well with other dogs.

We hope you found this post informative. Introducing pets to the workplace can be highly beneficial – but make sure that your business is doing it properly.

Why Smart Businesses Are Focusing On Employee Happiness

5 Ways To Prepare Your Office For GDPR (Infographic)
Scroll to top
We use cookies to ensure that we give you the best experience on our website. If you continue to use this site you are confirming your acceptance to provide the relevant data required.OkNoRead more